The Merriam-Webster Dictionary defines “cuisine” as a style or method of cooking that is characteristic of a certain country or region. By that definition, Rashe’s Cuisine qualifies as “cuisine.” But by the more colloquial definition often associated with fine dining and culinary artistry, Rashe’s falls short of its name.

Rashe’s is a Jamaican restaurant in Athens focused around a fast food sense. Food isn’t cooked to order, but rather cooked and stored in metal food pans, and served in Styrofoam boxes. Though having to serve people quickly does not seem to be much of a concern for employees; on both occasions that I went around dinner time, I was the only one in the restaurant. An employee waiting in the dining area was quick to get behind the counter and take my order.

The building itself, an aging shack decked out in a vibrant Jamaican yellow with bright green accents, is little more than a kitchen and a drive thru window. Customers walk in from the back end of the building around to the window inside a covered patio. A couple chairs and tables are scattered around for those who wish to sit and eat, and given the lack of a crowd, I had no trouble finding a spot. The decor inside is minimal. The area is screened in, and save a tropical mural painted on the kitchen’s exterior wall, the dining area is rather bare. The vibe, however, seems to fit the theme. The tropical hut feel, complete with a small garden growing outside, convinced me I was on the island of Jamaica, if only momentarily before the noise of cars trying to merge on the GA-10 Loop sucked me back to reality.

Rashe’s is located just outside the Loop near Exit 12, in a rather difficult location. Though I was the only one there when I went, most of the spots in Rashe’s lot were taken. Located next to Sr. Sol Mexican Restaurant, it seems Rashe’s lot is used more by neighboring patrons rather than their own.

Getting out of my car, I was instantly met with the aroma of fresh-cooked meat and the anticipation of Jamaican spice wafting from a smoker around the building’s side. The food, however, was a letdown on my expectations.

To preface, a bit of background on me. I live for spice. I actively seek out spicy foods. Peppers, hot sauce, curry, jerk seasoning; you name it, I want it. Knowing this was an apparently authentic Jamaican restaurant, I had high hopes. I was disappointed. 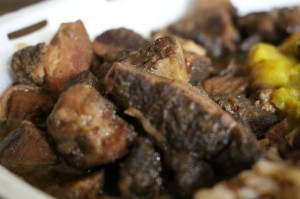 Rashe’s jerk chicken, though cooked well, was a bit bland and lacked any real sense of spice. The jerk pork had more flavor, but I find the jerk pork at Kelly’s, another Jamaican restaurant on Lumpkin Street, is more tender and falls apart better, more like pulled pork whereas Rashe’s was closer to a brisket. Rashe’s rice and beans, though nothing to write home about, can at least hold their own in terms of taste in comparison to the flavorless grains at Kelly’s. The plantains from Rashe’s were decent, though they aren’t the sugary sweet fried plantains many may expect. The curried vegetables weren’t my cup of tea; despite their yellow tint, the curry taste just was not there.

The real tragedy here comes when comparing sauces. At Kelly’s, the sauce soaking the pork is little more than water and that delicious jerk spice. Remember when I said I like spice? I think Kelly’s may have exceeded my limit. At Rashe’s, the opposite is true. It’s thicker, more like a gravy. Both Kelly’s and Rashe’s call it ‘gravy,’ but Kelly’s is definitely too thin to be considered as such. What Rashe’s gravy lacks in spice it makes up in savor. It’s thick and hearty, with sprinkles of pork fat stewing in it. Kelly’s sauce eventually became overwhelming halfway through my meal. Meanwhile at Rashe’s, I was spooning the gravy from the bottom of the box, desperate to get every last drop.

At the end of the day, the perfect Jamaican meal would take elements from both restaurants, the tender pork and the fearless use of jerk spice from Kelly’s in combination with the amazing gravy from Rashe’s. Unfortunately, it isn’t all about the sauce. All other elements of Rashe’s either met my expectations or, more commonly, fell short of my expectations. Owner Rashe Malcolm has said before that her approach was savory over intensely spicy, and with that in mind, she has met her goal. But although Rashe’s is priced lower than Kelly’s by a couple dollars, the expectation that Jamaican food means spice is what gets me in the door. I’d happily spend a little more if it means I walk away with a numb tongue.

View all posts by Staff

One thought on “Rashe’s Cuisine: It’s all about the sauce”